The final solutions for cold hands? 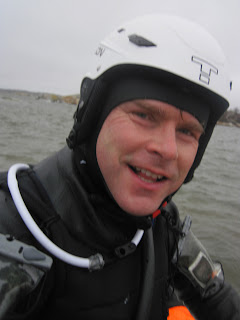 When I heard about this product, I just ordered one straight away. I mean, this might be the solution to one of the biggest problems we have here in Sweden. (At least from my perspective). From October to April we are freezing when we windsurf. When I started with winter-windsurfing in 1983 I bought a Gul Steamer, ever since then the body never gets cold, with all good suits that have followed (remember Sola Titanium!!). And when Atan launch their winter boots, any cold feet don’t bother me. And there are some good hoods on the market. But the hands are still a problem. Dakine Cold Water Mittens are not bad. But in below 5 C, I freeze. And open palms mittens. Just forget them from December-March. So it was a no-brainer to get this suit innovated by this guy Iain in UK (according to the name, Ianovated).

First impression:
Big. Roomy. Soft. Long legs. Cold?
I always have XXL or 56 on wetsuits, even if I am only 183 cm tall. The main reason is that arms and chest else are too tight. This suit are more constructed as a diving suit on the upper body. That means it has space. I went out in -2C for a 30-minute walk. With nothing else than shorts under, the suit was not hot, almost a bit chilly. But with the polypro lycra it felt OK, both in temperature and space.  About the softness, it seems similar to my Neil Pryde Elite. Good you think. Well, not necessary. That means that it could be fragile. The suit I got is a Smooth-skin (size Large), not double lined. I hope it is better than the NP´s... 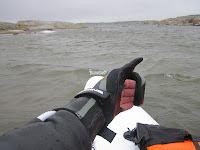 OK, now tested in IRL. 3 hours in air temp 3 C and 1 C in the water. A LOT of floating ice. With Pro Limit mittens the thumbs where cold. With DaKine with open palms, no problem with any fingers.
The suit was balanced well in temperature. And not any water came into the suit. I believe all winter surfers (also kite) will buy this or a similar suit within a few years. A lot of copies will follow for sure.
http://www.gps-speedsurfing.com/default.aspx?mnu=user&val=113600&uid=2558 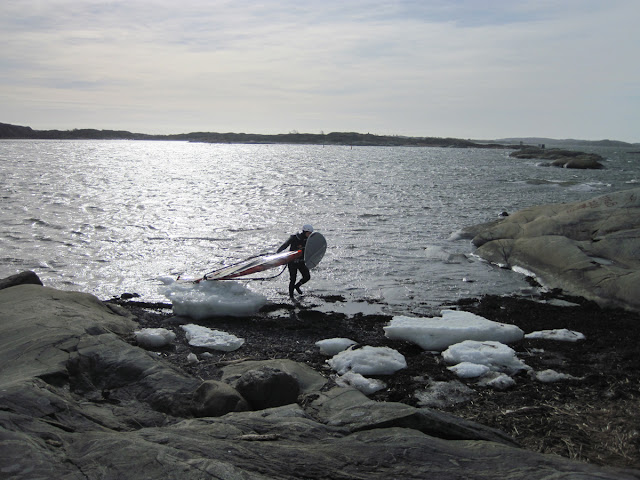 When I attended the German Speed Championship in 2011, they had a very interesting seminar about fin-theory, hosted by Maui Ultra Fins and their designer Rick Hanke. No doubt that he knew what he was talking about. I am myself an engineer and I had some flashbacks from the 4 years I spent in school with my calculator, formulas and tables ... I reckon he had a PhD in aerodynamics and he really put his delta-fin innovation to the sky. Theoretically the best speed fin in the universe so far. But he was clear about an other German fin-maker, "Wolfgang Leassacher, his fins are disasters, with concaves on both sides.  Do not work at all."

On the parking lot on the outside Wolfgang took a nap at the same time. But as most of us know theory and practice do not match well in windsurfing.

Since I started with speed, I have loved the Chamäleon. I must have had more than 50. When you lose the grip with it, it only slides in a very controlled way sideways, like a sportscar.
I said to Wolfgang that I love them, but I have problem with the 28cm in combo with 8,6m2 or bigger. Wolfgang replied, “hey when I designed that fin 20 years ago the biggest sail was 7,8. You must test my new ones now.“

At German event 2012 he delivered a handful of new fins. But I never test any new products for the first time in an important event. (It was one of the European Speed Tour events). And the following 6 weeks, it was all major events in the Swedish and England. But in the closing weeks of 2012 I had some opportunities to use Wolfgang’snew shapes. The sizes were not perfect matches to my board range, but they are absolutely top notch. No other makes can match that grip in the same size, and the speed was about on par with the best. I also used the Duo Speed Weed 32 on my CA SL78 and it worked very well (but I really need a deeper fin with more lift to that board). It is great that we have guys like Wolfgang that have the guts to do things different. Now I also have the right sizes, looking forward for the test session in Egypt soon!