The trip to Namibia was a true experience for sure. The mind-set was to go down there and participate and get home alive and not with too many damages. I was prepared for a few, but not to be a cripple when returning home. No 50 knot musts! I had prepared myself as well as I could and in equipment ( e.g. I brought 15 masts) I only missed an SDM-mast for the smallest sail, (which I did not use anyway). In general we had a great time. The international speed windsurfing scene is a very friendly community and has an open and positive mind-set. 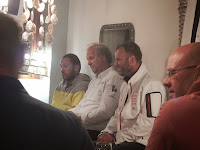 With all participators we had many great moments around the canal, at the trailer back to the start, at the Nest Hotel breakfasts, in Diaz Coffee shop and at the dinners at various places. We, the Swedes did also a series of Web-TV (will be subtitled soon) and a few episodes with Patrick and Antoine.

About the sailing. I did only had one really powered up day. That day I felt a bit like a rookie and it was more about getting into the feeling of making the way through the canal, rather than trimming the equipment and catching the speeds. This was my first day ever with a smaller board (less than 44cm) in combo with a sail less than 6m2. (I am really only used to 8,6 and + 60 cm boards).
Getting rid of the ghosts and fear about crashes etc. The runs went better and better during the day. Started with 42 knots, 42,5, 42, 43,5 44 and 45,5 knots over 500m. Peak 47,7 knots or 88 km/h. 5 knots faster than I ever have sailed. It was super gusty and I had bad luck with the gusts, except of once, but I did not dare to sheet in that moment... I guess that was my chance to break 50. But I thought this was only the start for the next 3 weeks... 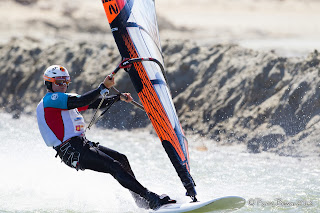 I listened to some advice from Anders Bringdal, to lower the boom quite a bit; it resulted in some better speeds but ended up in a HUGE catapult in the middle of the course in 45 knots.

The sailing challenge in Luderitz is to get on the board quickly in gusty low winds, be quick into the harness and straps and do the corner with good acceleration. I never managed to do that all well in the same run…

What I did not like was the level of the water in the canal, about 50 cm too low, the sailable width  was in some parts less than 2 m and very shallow.  To have a wall that is 2-3 m high on the leeward side did not feel good either, if a fin broke we would been mashed or nailed into the wall. And the almost empty so-called ambulance was something from a surplus sale from the mid eighties. I expected a modern, fully equipped ambulance with a team of paramedics…
When Sophie crashed it became obvious that the wall and the rescue-team was the weakest part. When she crashed we all did our best and I do hope she will recover very soon and will be back in business. 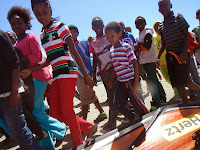 To wrap it all up. A true experience. We cannot do anything about he winds. I am satisfied with my runs during the given conditions. I might return back another year, if the event team could guarantee a full canal, no high walls and a trained rescue crew. And I also think it would be wise if maximum 15 riders participate the same time. To avoid waiting lines for 30-40 minutes. I belive if this event will come back, they have to make the setup different.


I would like to thank some people a bit extra that made this trip special; Patrick Diethelm who helped me with the SDM-masts and boom-adaptation and Anders Bringdal for your mental support and my traveling partner Daniel Borgelind. Jeroen and Brad who drove the trailer when the official timing was down.