People sometimes ask me:
- You have so many fins, please tell me, which one is the best one? 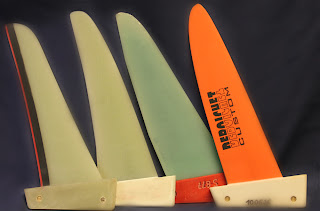 OK, the fins are for most speed sailors a well-kept secret. Most understandably, the fin is extremely important. But I will in this blog post reveal some golden nuggets.
But first some basics. There is generally no best fin. There is just the best fin for a certain moment and condition. In this “test” I used 28-30 cm fins from five different premium brands. I sailed on a Carbon Art SL53 speed board, which is a narrow board with about 83 litres of volume. I used a 7.0 full cambered racing sail and the wind was gusty offshore 25-30 knots. I did about 5 runs with every fin and logged 10 seconds average speeds around 36-37 knots in most runs. The spot was Karpathos and I brought +30 fins last summer to the lovely windy island. 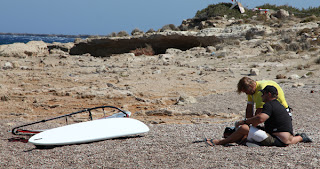 At this spot the entry speed is important. It is pretty much a slingshot when you accelerate 10 knots within 2 seconds. The grip is important, and then there are two more gusts, some small chops and a 20 meters to stop. Again the grip is important, because when you release the pressure from the sail, the tail-walk starts instantly.

This is what I call a reference fin for all speed sailors. It is a premium fin made at Maui. It is not too hard and not soft. It works on most types of boards. All top speed sailors that I know have used it. It was very popular around 2007-2008. It is still a very good fin. If I didn’t know better I would have been very happy with it. But at a gusty spot when the speed exceeds say 36 knots and you get another super gust, spinouts could occur. I would say that this fin is excellent in more stable conditions. This fins works very well to both small slalom- and speedboards.

A very stiff custom fin that really needs a skilled rider with good reaction and big muscled legs. Even if I consider myself all of the above, I really do not feel comfortable with the UW. It is so stiff and it is hard to find the perfect trim for that fins when it is gusty. Even if it never spun out, I really did not feel safe and therefore did not hit the best speeds. Probably better in more controlled spots like Dungervan or Sandy Point etc, where the runs are longer and you build up the speeds during a longer time and you can work with more controlled trim of the rig. 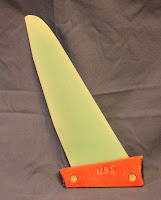 C3 Venom
The C3 is made at the Cobra plant in Thailand. Still a high quality product and I would say that it is worth the high price. It drives extremely well upwind and in the acceleration phase and when I bear off I just hold on and forget about the board. It is so easy to ride. I guess it has to do with the softness. The only con is that it is a little more fragile, with the thin top.


Black Project Type S
The BP fins are pretty new in the market. They are developed on Maui but produced in China. But that is nothing bad. It is affordable and after sanding some paint off, it is as good as the C3 Venom in the acceleration and off wind. Maybe not as good up-wind, but this is not a slalom fin. Not as fragile as the C3 and much cheaper. Very much bang for the buck!

Choco Mach 1
This is what you get if you cross the shape of a Tectonic and produce it in the same factory as C3. It is not a bad fin, but it doesn’t have the edge and feels as the other above. I would say that it is an okay fin for those who doesn’t need to break 40 knots. But there is a reason that I have sold most of mine. Daniel Aaberli (Choco) has launch a Mach 2 which is thinner, but I have never tested that fin.

Conclusion
My personal choice is C3 Venom and Black Project Type S. I know many riders that prefer the others. I do not say they are wrong, but now you know what I think. Maybe you wonder what fin was the fastest? Well I did this test during 3 hours and the wind and water are not the same in every run. The C3 was a little ahead of BPF but within the error margin. The Tectonics almost in par with the other two, and the Deb and Choco just behind. I also tested a few more fins during this day but they where disasters. Maybe thats the most important conclusion, all premium fins are good, just small differences in personal taste.