A quick visit to Sandy Point

In November we did some "speed tourism" in France and visited ”The Canal”, a holy place for every speedsurfer. Now when I am in Australia I just felt I had to go to Sandy Point. SP is the place where they frequently are posting + 45 knots sessions. So the last week down under, we did a 2300 km detour down south and back. First we went home to Tom Chalko. Everyone that have a GPS from Locosys have probably visited his website when setting up the unit. http://mtbest.net/
But the meeting with him and his fantastic farm is probably better to read about on my wife’s blog… 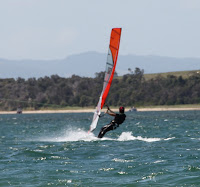 Anyway Tom asked us if we would like to go for a jungle hike or go windsurfing. Go windsurfing, today? I replied. The forecast was 5-10 knots from east. (The wrong direction and I knew that Tom’s biggest sails are 6,3). Well we went. And I must say that I was amazed when we came down to SP. The wind was around 10-15 knots and many guys were out on the water. Tom help me rigging the KA 6,3 for no low wind and I mounted my biggest fin, a C3 28 Venom.

We had a great day with speeds around 25-28 knots. The speedstrip of the day was on the opposite side. The tide was going out and we sailed against the tide, so I think every run was about 2 knots slower. Also the tide made it very choppy. And as the day went by, the wind became weaker and weaker. Still extremely fun to sail. The Starboard Futura 101 had no excellent top speed, but easy to get going. 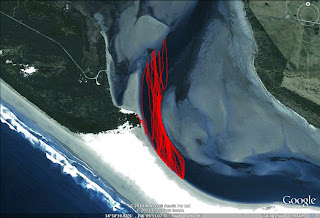 I was thinking about Per Andersson, the late Starboard legend when I was sailing. The small KA sail was working surprisingly well but it felt a little bit like sailing in jam. After about 5 hours, I asked Tom if we could switch boards so I used his Carbon Art SP50 the last run. Suddenly I was doing 32 knots instead of 27 knots. The board is important. But I also have to admit that in the end the tide was not so strong. Thanks Tom for letting me use our stuff, it was a very memorable session!
Upplagd av Anders Bjorkqvist kl. 1/05/2011