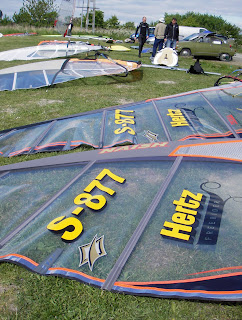 2008 was the first year that I sailed speed with a GPS unit. I bought four new slalomboards from Naish; SP80, SP95, SP110 and SP128 litres. And camber sails, Naish Stealth 5.8, 6.4, 7.0, 7.8 and 8.8. I had no idea what fins I needed but Choco Mach 1 and Fireblade and Lessacher Chamelot looked alright. I was very happy with my wave-booms from Chinook, so I bought also the racing-booms from them, but they where far too soft.

In early March something terrible happend. I had some kind of infection in my ear and became deaf and lost my balance. For 4 weeks. God I was depressed. But slowly I begun to get my hearing back and in May I was on board again.

The second obstacle, on the way to the first speed contest all my new boards fell off the roof on to the highway in the middle of the night. 4 broken boards, not a good start... 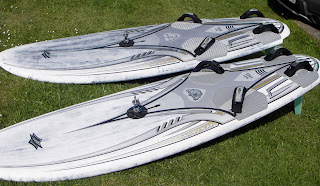 The third problem, how should I tune this stuff? At the first slalom contest I used a 30 cm fin to the the 7.8 sail. The whole run was a big spinout. The first speedcontest I used a 6.4 sail on the 80 liter and did runs of 32 knots. Every one in front of me uses either 7.0 or 7.8 and was sailing faster. I had simply no idea how to trim the gear and had no top Naish-sailor to ask. 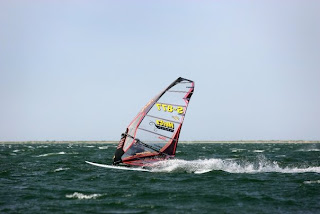 What the hell should I do? Well what I did was spending almost 70 days on the water at home trimming and tuning. And when it was time for the Swedish Championship in October I had found the speed in some of the boards and rigs. I won one heat and did well in the rest. I finished 5th that year overall in the Swedish Speed Tour 2008.
Upplagd av Anders Bjorkqvist kl. 11/24/2010

Email ThisBlogThis!Share to TwitterShare to FacebookShare to Pinterest
Etiketter: Equipment