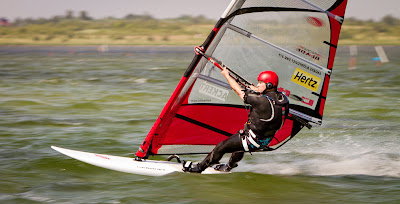 Last weekend we sailed 2 international and one national speed contests in Klagshamn in the very south of Sweden. All contests where sailed during the same time, but different classes and rules in each contest. The easiest rules was the Heineken Trophy Match -  Sweden vs Nederland, where the top 5 sailors from each countries 250 meter average speeds where counted together. I sailed well in the only valid heat. 31,4 knots in about 18-20 knots of wind and I scored the second best speed in that heat. We, the top 5 swedes, managed an average speed of 31.2 versus 28 knots for the 5 guys from Nederland. 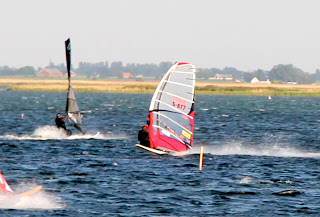 The second contest was the Swedish Speed Tour. 26 competitors had paid the membership-fee to the national Swedish federation. This year the rules has been changed so they would be as close to the international as possible. A 250 meter run on a fixed course, and minimum 20% of the fleet have to do 3 runs over 28 knots. We started 9 heats but only 3 where validated with the new rules. I did not win any heat and ended on a clear 4th place. I did my best and I am quite happy with the result.


The third contest was the European Championship Speedwindsurfing Tour.

Ten male competitors had paid the membership-fee to the ISWC. 2 x 250 meter run on a fixed course, and minimum 20% of the fleet has to do 3 runs over 28 knots. This turned out to be a very special game. With only 10 men it only needed 2 guys to validate a heat. During the first heat last day I did three +28 knots runs. But the heat where not valid beacuse not 20% of the fleet did not do 3 runs. All that I needed was one other guy that sailed an extra 28-knots lap. Easy. That could have switches some places in the final results-list... I do not know why that did not happened. Tactical reasons maybe?

And in the last heat there were only 0,06 knots between me on 4th place and Marcus on the 2:nd. We all had 30,5 knots avarage on 2 x 250 meters. The margin of error for a GT31 GPS-unit is… a lot more than 0,06 knots. So when I conclude this event; I sailed very well, but did not score 100% in the results. Ended up 4:th in this contest too. Results here.  Next time the luck might be on my side! Anyway, I am extremly happy with my gear this year. The Loft Sails and Carbon Art boards rocks!