The past year has not been easy with my body. During the spring I ran on all different specialist about the grip in my right hand. It felt simply not strong enough. The first thought was carpal tunnel syndrome, but I am still not sure about the reason, maybe something in my spine, they said... But none gave me any advice to do surgery, so I got a PT and started with swinging kettle bells. I gained some strength. In June I went to Fuerteventura and finally got the World Championship Trophy Super Master. But the sailing conditions where over the top, down there. Gosh it was choppy in the end of the runs. 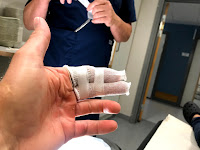 But in early August I got a cold... After 3 weeks I thought it was a sinusitis, and started to get treatment for that thru an Internet doctor, but god, it went 10 times worse. Then my back got very bad, so I went to all ortho-therapists worth the name, it became 10 times worse. After 2 months, I went to a real doctor, after one second he said, - I understand that you have had problems with breathing and your back, since you at least have pneumonia. 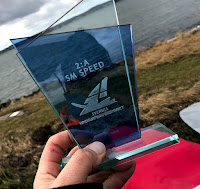 So I got antibiotics and it felt some better. Went out windsurfing to test my back, but cut my right hand badly on the back of a fin (waterstart with fin stucked in the harness-lines, and the rig flipped while I lifted the fin). A week later at the Swedish Speed Championship I took 10 pills to reduce fever, pneumonia and betapred for the head, duct tape on the hand, and after 4 heats I ended up second overall, even won one heat. Felt great. The back and the hand were OK after the event. So I decided to go to Weymouth 2 weeks later. This time not with the goal to win, but to participate and enjoy.

The first 2 days in Weymouth/Portland we had a harbour course with winds 20-45 knots. I had tough days, fever and hard to breath. The chops where crazy and my 7,8 m2 sail felt big enough, but my speeds where terrible (I was not aware that everyone else was on 6.3. The third day, my body felt great, and everyone where on the same sails as myself. 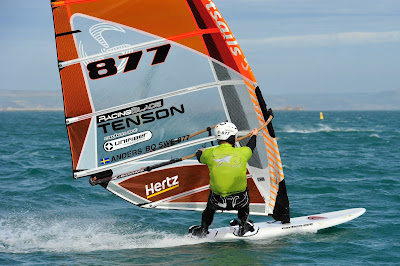 In the mid of the week I got the test result from the lab. Mycoplasma Pneumonia and TWAR... So I am in the middle of the legendary Weymouth speed week, and I am in pretty bad shape...

But my speeds where competeable and life felt pretty great. The super strong wind really did not come back, but winds around 15-30 knots where a lot better for my unfit body.

To my conclusion. Should I lay down on the bed and wait to heal, or should I do something that I enjoy? Life is quick, so I prefer to windsurf, and really no doctor will ever keep me off from the water, I think the best medicine to heal is windsurfing!